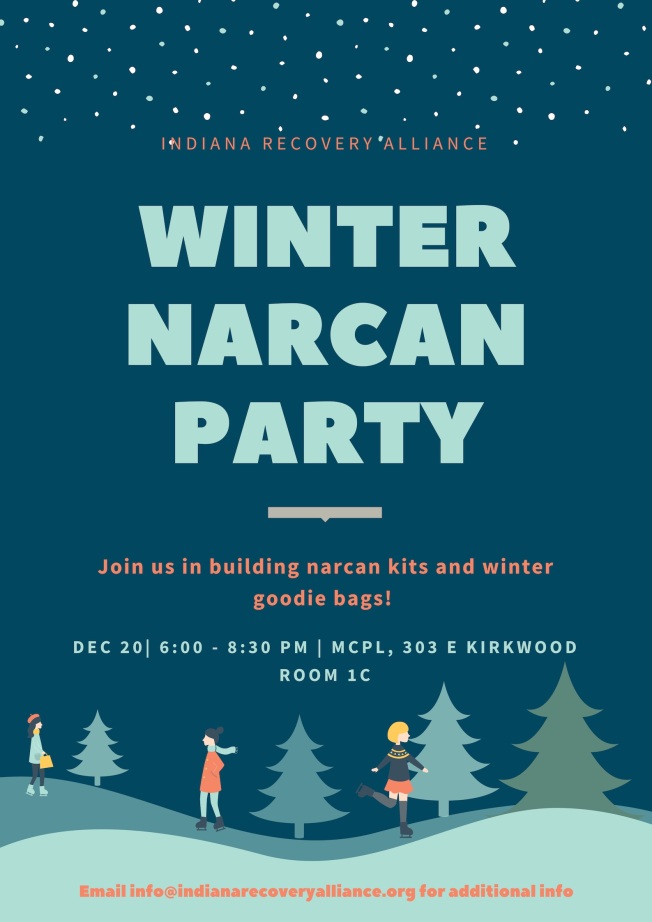 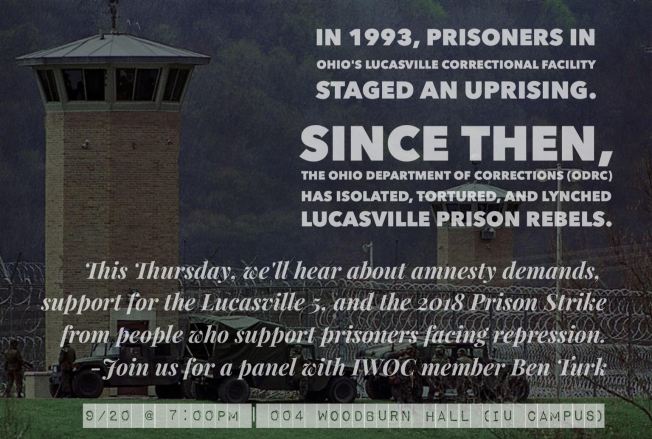 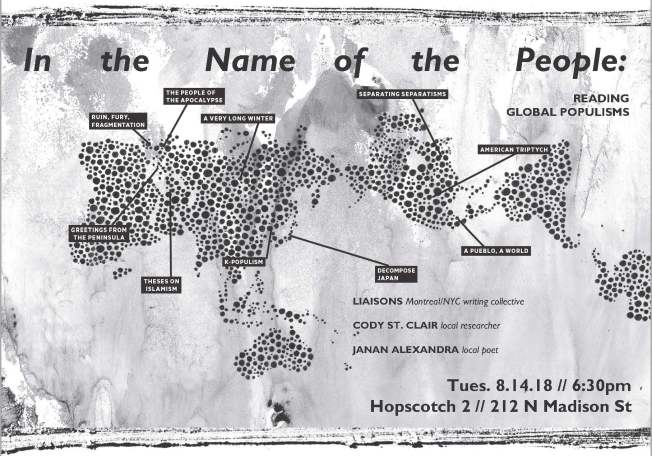 In the Name of the People: Reading Global Populism

“In the Name of the People” is the first book by LIAISONS, a collective of authors from America, France, Italy, Japan, Korea, Lebanon, Mexico, Quebec, Russia, Spain, and Ukraine. The book is an analysis and reflection on the global populist surge, written from our experiences within the localities we inhabit. The upheaval and polarizations caused by populist movements around the world indicates above all the urgency to develop global revolutionary perspectives, and to make the necessary
connections to understand and act in the present.

CODY ST. CLAIR is a Ph.D. candidate in the English Department at Indiana University. Their presentation focuses on contemporary housing struggles. Since the 2008 financial crisis, an eviction epidemic has ravaged working and underemployed communities. As the courts prioritize private property rights over living rights and as the privatization of the commons appears limitless, the Left must find traces of the commons—spaces of collectivizing, revolutionary potential—within private, privatized locales. Turning to the 1930s history of spontaneous eviction protests, this talk advocates for a politics that regards all housing—all private, domestic spaces—as publicly and collectively constituted. This history of insurgency against eviction exhorts the current Left to see housing as part of the common, as a fundamentally public concern, and to recognize eviction as a form of violence against the public common.

JANAN ALEXANDRA is a Lebanese-American poet and first-year MFA candidate at Indiana University. She was born in Nicosia, Cyprus and now lives in Bloomington by way of Baltimore, Los Angeles, and Portland, Maine. Her writing is informed by a determined belief in the radical and liberatory work of paying attention—through language & rigorous imagination. Janan is interested in the ways that our linguistic choices are overlaid with geography, ecology, trauma, legacies of colonialism, war and exile. For the last three years she has taught poetry and creative writing to youth, and before that she helped to run the Smith College Poetry Center. She has a BA in African-American Studies and Poetry from Smith College and has published poems in the Adroit Journal and Rusted Radishes, a literary journal coming out of Beirut, Lebanon. Janan believes in the truth-telling power of poems and is keen to disrupt linear narratives, create new language, and make art under capitalism.

A presentation by the Indiana Recovery Alliance

We will view “The Caring Community: Ithaca and the Movement for Supervised Injection Facilities” (https://vimeo.com/208687334), host a panel discussion (details soon) and facilitate a robust discussion about how our community might better engage community members who are using drugs.

The second part is a deeper, participatory workshop for affinity groups and individuals who are ready to get involved, “GIVING OUR BEST, READY FOR THE WORST: COMMUNITY ORGANIZING AS DISASTER PREPAREDNESS” Monday, April 16, at 3pm in office of Girls Inc, 1108 W 8th St. Free admission – all are welcome!

The Mutual Aid Disaster Relief (MADRelief) Training Team is visiting our community. Currently MADRelief is on a national capacity-building and educational tour. They will explain how natural storms turn into unnatural disasters through dangerous new forms of “disaster capitalism” and “extreme resource extraction,” and train diverse affinity groups on principles of grassroots direct action humanitarian aid and crisis response, covering a wide range of topics such as “Principles of ‘Solidarity, Not Charity,'” “Scouting, Mapping, and Understanding Your Community’s Resources,” “Building Power in Collaboration,” “Overcoming Trauma Together,” and “The Logic of Logistics.”

The reality of the climate chaos which is already redefining our future, coupled with rapidly escalating inequality and the civil political unrest that follows, is only worsened by a failing model of crisis management and aid programs centered around political opportunism and disaster capitalism. The time is right for developing a trained and empowered standing network of organizers and volunteers who can help communities rebuild with a vision centered on local community control, collaboration and innovation, and political, economic and social sustainability.

MADRelief is developing a community of grassroots crisis responders, continually growing in size and efficacy, which will be at-the-ready to assist and empower communities to overcome natural and unnatural disasters – from hurricanes to hate rallies, from mudslides to mine waste spills – and to transform these tragedies into opportunities for collective liberation. MADRelief envisions a new form of humanitarian aid, one that is participatory and empowering. One that exemplifies the principle of “Solidarity, Not Charity.” Founded by an already very active network of radical humanitarian aid workers experienced via Common Ground Relief, Occupy Sandy, the Standing Rock Water Protectors, and the long history of diverse movements seeking to make a better world possible, MADRelief is organizing a new network to facilitate inter-community disaster preparation and grassroots direct action humanitarian aid and crisis response. This tour is the first step in a “training campaign” that will strategically and progressively build necessary skills and shared knowledge in local groups that are a part of the rapidly-growing MADRelief network. 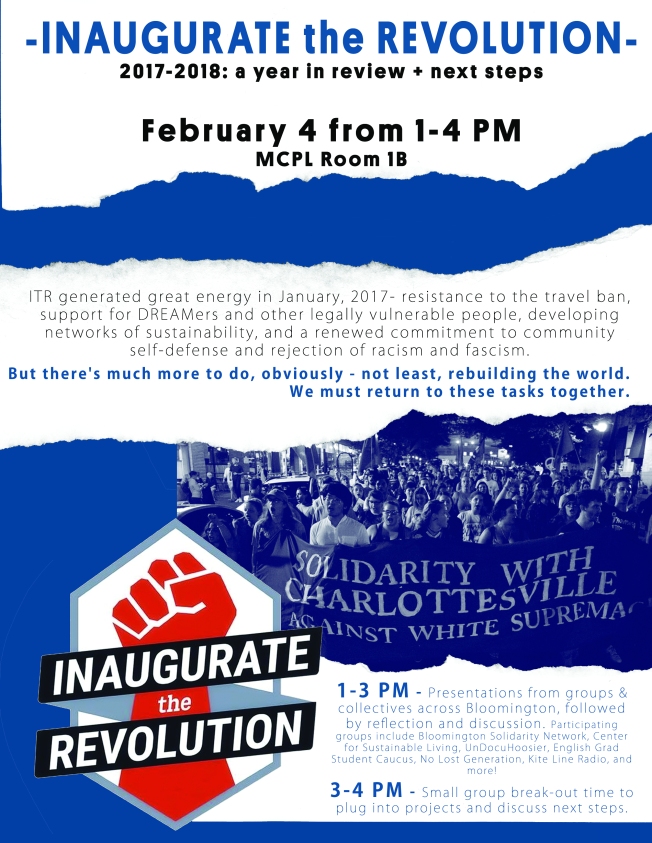 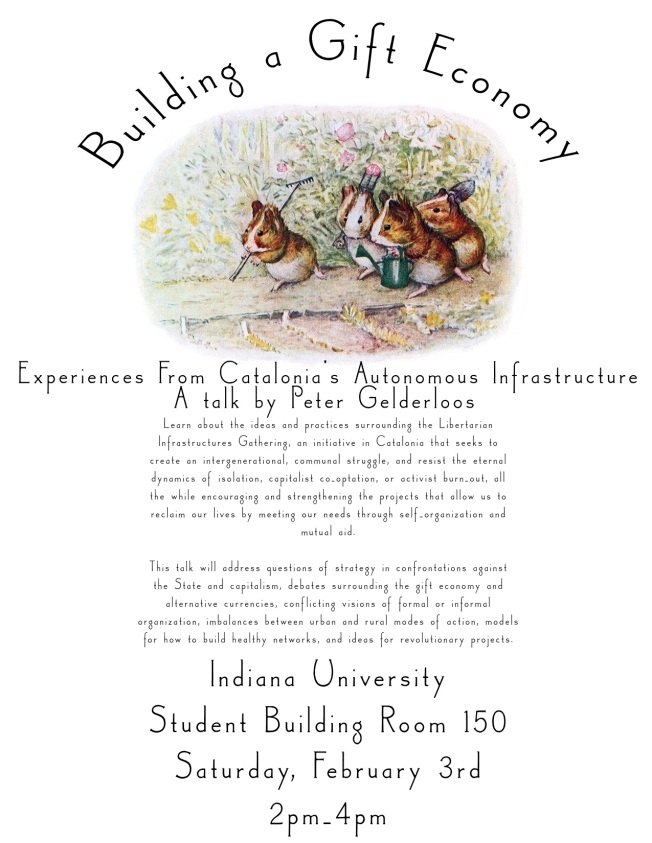 Learn about the ideas and the practices surrounding the Libertarian Infrastructures Gathering, an initiative in Catalonia that seeks to create an intergenerational, communal struggle, and resist the eternal dynamics of isolation, capitalist co-optation, or activist burn-out, all the while encouraging and strengthening the projects that allow us to reclaim our lives by meeting our needs through self-organization and mutual aid.

This talk will address questions of strategy in confrontations against the State and capitalism, debates surrounding the gift economy and alternative currencies, conflicting visions of formal or informal organization, imbalances between urban and rural modes of action, models for how to build healthy networks, and ideas for revolutionary projects. 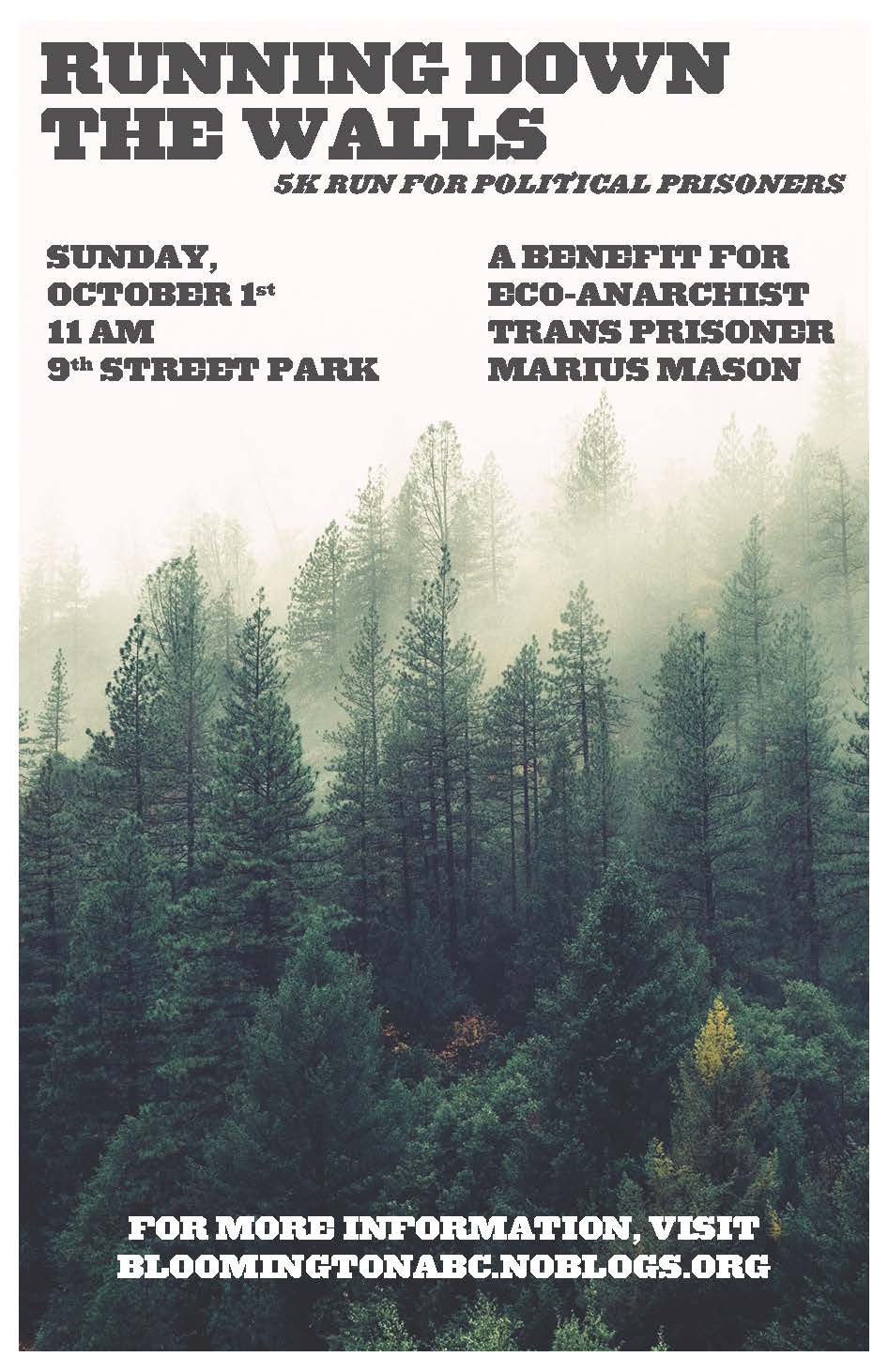