After their land was seized to make room for a new highway, families are crushed under the weight of progress. 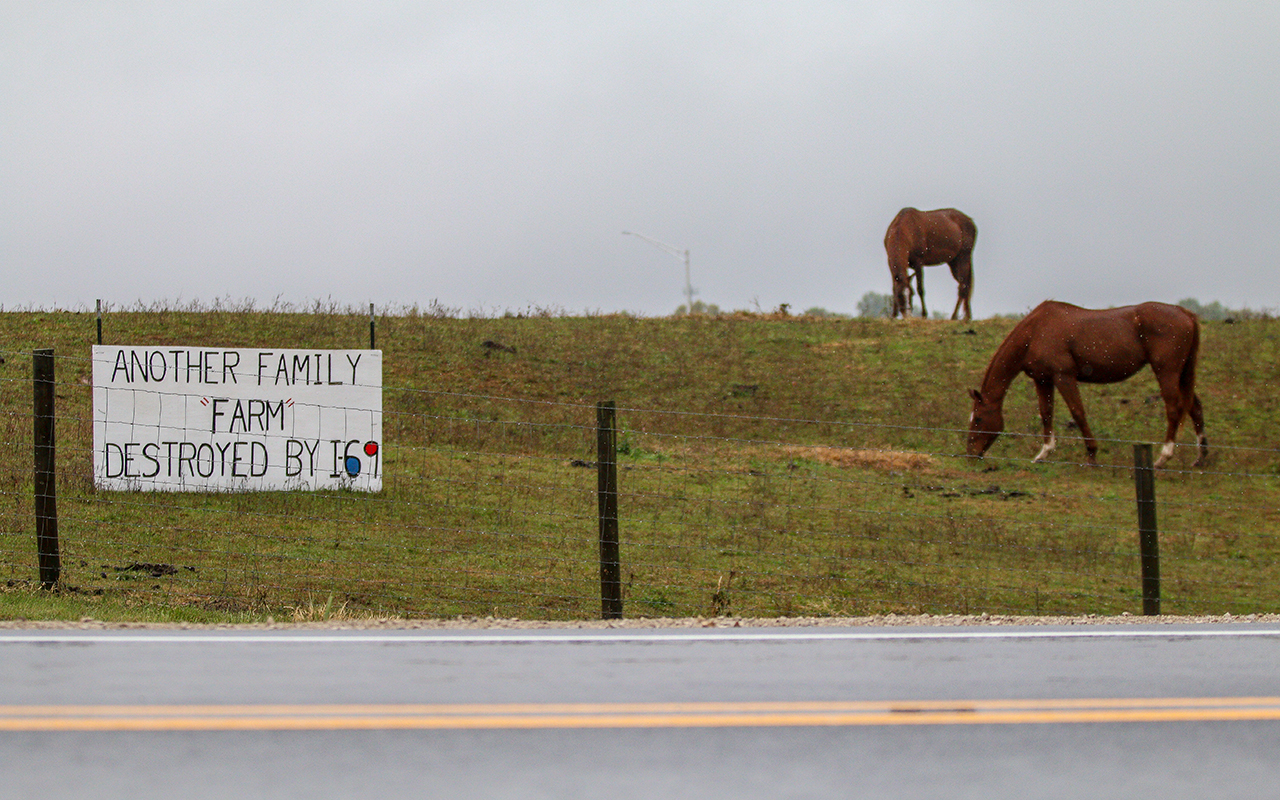 Joseph Jackson was worn out.

He and his wife sat helplessly for four years as the state of Indiana seized a chunk of their 80-acre farm, along with some of their neighbors’ properties, to make way for a new section of I-69. The large hilly field where the Jacksons’ quarter horses used to graze was paved over. The horses became too scared to cross the new access road that rose from that pavement. After construction workers installed a drain next to the Jacksons’ house, the basement flooded repeatedly. They awoke at all hours of the night as crews set off blasts that felt like small earthquakes. Finally, Cathy Jackson became so overwhelmed she moved away from the home where her family had lived for more than half a century.

Now Cathy was gone, living two hours to the south, and her 71-year-old husband was stewing on the front porch of the house he had built with his own hands. He wasn’t sure how much longer he could hang on. He needed to do something — one last attempt to make the world pay attention.

He asked his 21-year-old granddaughter for help. The two found a 4-foot-by-8-foot piece of plywood. He sat next to her with a can of paint, deciding exactly what to say. He gave her the brush, and she started painting the big black letters.

He and his granddaughter planted the sign in the perfect spot, a hillside that would maximize visibility. He needed people to know that if they think they own their land, they don’t.

ANOTHER FAMILY “FARM” DESTROYED BY I-69

END_OF_DOCUMENT_TOKEN_TO_BE_REPLACED

The second part is a deeper, participatory workshop for affinity groups and individuals who are ready to get involved, “GIVING OUR BEST, READY FOR THE WORST: COMMUNITY ORGANIZING AS DISASTER PREPAREDNESS” Monday, April 16, at 3pm in office of Girls Inc, 1108 W 8th St. Free admission – all are welcome!

The Mutual Aid Disaster Relief (MADRelief) Training Team is visiting our community. Currently MADRelief is on a national capacity-building and educational tour. They will explain how natural storms turn into unnatural disasters through dangerous new forms of “disaster capitalism” and “extreme resource extraction,” and train diverse affinity groups on principles of grassroots direct action humanitarian aid and crisis response, covering a wide range of topics such as “Principles of ‘Solidarity, Not Charity,'” “Scouting, Mapping, and Understanding Your Community’s Resources,” “Building Power in Collaboration,” “Overcoming Trauma Together,” and “The Logic of Logistics.”

The reality of the climate chaos which is already redefining our future, coupled with rapidly escalating inequality and the civil political unrest that follows, is only worsened by a failing model of crisis management and aid programs centered around political opportunism and disaster capitalism. The time is right for developing a trained and empowered standing network of organizers and volunteers who can help communities rebuild with a vision centered on local community control, collaboration and innovation, and political, economic and social sustainability.

MADRelief is developing a community of grassroots crisis responders, continually growing in size and efficacy, which will be at-the-ready to assist and empower communities to overcome natural and unnatural disasters – from hurricanes to hate rallies, from mudslides to mine waste spills – and to transform these tragedies into opportunities for collective liberation. MADRelief envisions a new form of humanitarian aid, one that is participatory and empowering. One that exemplifies the principle of “Solidarity, Not Charity.” Founded by an already very active network of radical humanitarian aid workers experienced via Common Ground Relief, Occupy Sandy, the Standing Rock Water Protectors, and the long history of diverse movements seeking to make a better world possible, MADRelief is organizing a new network to facilitate inter-community disaster preparation and grassroots direct action humanitarian aid and crisis response. This tour is the first step in a “training campaign” that will strategically and progressively build necessary skills and shared knowledge in local groups that are a part of the rapidly-growing MADRelief network.

On the morning of Thursday Nov. 9th, the Indiana Department of Natural Resources (DNR)’s Division of Forestry sold the timber rights to 299 acres of the Yellowwood State Forest Back Country Areas that are some of the oldest and most diverse in the state. Nearly 2000 trees were sold to Hamilton Logging, who have a long history of shady business practices and timber theft.

Despite over 200 people showing up to protest the sale, months of organizing against the planned logging, and a recent protest encampment being established on private property adjacent to the public land to be logged, the DNR insisted on selling another piece of some of the most wild and beautiful land in the state – for a mere $108,000.

So during the weekend following the sale, we painted hundreds of additional trees to match those the DNR had marked for removal in two of three tracts on the chopping block. We did this to obscure the trees Hamilton Logging bought, and to force the DNR Division of Forestry to redo the work of marking these tracts, thus delaying when logging can start.

We understand there is a risk that these additional trees could be cut down, but only if the DNR Division of Forestry and Hamilton Logging show unprecedented, intentional negligence, by letting a group of pranksters mark the trees for them. Logging all currently-marked trees would be a violation of the contract between the two parties, which only includes the trees the DNR chose to mark, not the hundreds more we marked with identical paint and markings. We hope that by painting these additional trees we can stop them from taking any of them – or at least slow them down.

To other defenders of Yellowwood: there are many more trees left untouched. All it takes it red or blue marking paint, and some careful navigation. We wish you luck and look forward to all the other creative and inspiring ways you’ll think of to protect the land.

Reposted from It’s Going Down:

Last night we tagged a Duke Energy office with words “James Marker, #NoSabalTrail.” This was done in memory of James Leroy Marker, who was killed by Florida police after using a high powered rifle to sabotage the Sabal Trail Pipeline. Duke Energy is heavily invested in this pipeline and is therefore complicit in James Marker’s murder.

This fracked methane pipeline threatens unique ecosystems associated with the Floridan aquifer, including countless rivers, lakes and streams and the associated flora and fauna. Though this was but a small act, it serves as a reminder that pipeline resistance isn’t limited to construction sites or public rallies.

Vengeance for James Leroy Marker! Down with the pipeline and its world!

Breaking away from the jail demo tradition, we kicked off the new year with something fresh and exciting. At the stroke of midnight we dropped four banners and let five thousand fliers rain down from two downtown parking garages. United with friends, we reveled in the togetherness we will carry with us into the new year. 2016 was shitty and we expect that 2017 will be as well; however, we recognize the need to continue fighting. With these modest acts, we sharpened coordination practices that we will need in the coming months and years. Each of the banners reflects an element of our revolt we intend to strengthen and spread over the next year – combative memory for our fallen fighters, solidarity with our imprisoned comrades, determination to continue fighting no matter what is thrown at us, and struggle against immediate manifestations of power. 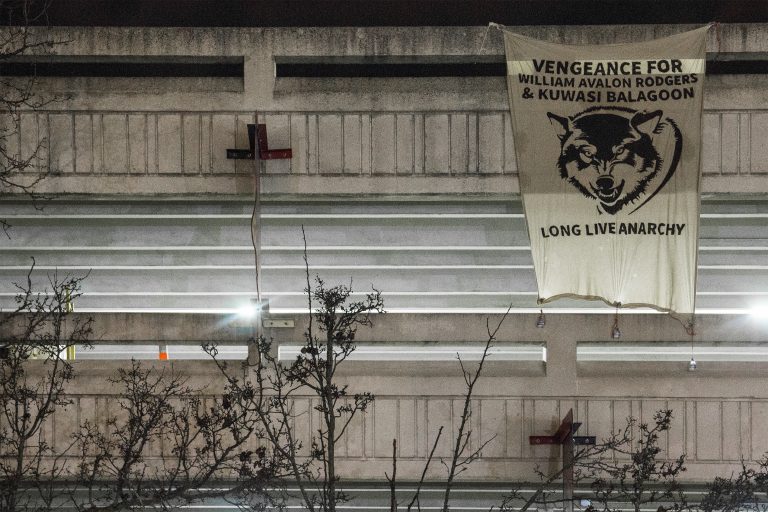 As December ends, we also take time to remember the lives of our fallen warriors. William Avalon Rodgers was an Earth liberationist who took his own life on December 21, 2005 while in jail awaiting trial on arson charges. Kuwasi Balagoon was a former Black Panther, fighter in the Black Liberation Army, bisexual, and anarchist who died in prison from medical neglect due to AIDS-related illness on December 13, 1986.

December 2016 marks 11 years since Avalon’s death and 30 since Kuwasi’s. We will not allow those who sacrificed everything for freedom to be forgotten. As we continue our struggles against Power, we keep alive the memory of Kuwasi, Avalon, Alexandros Grigoropoulos, Sebastián Oversluij, Lambros Foundas, Mauricio Morales, Feral Pines, and all of our other comrades who have passed on. Memory, like fire, burns our enemies and keeps us warm. 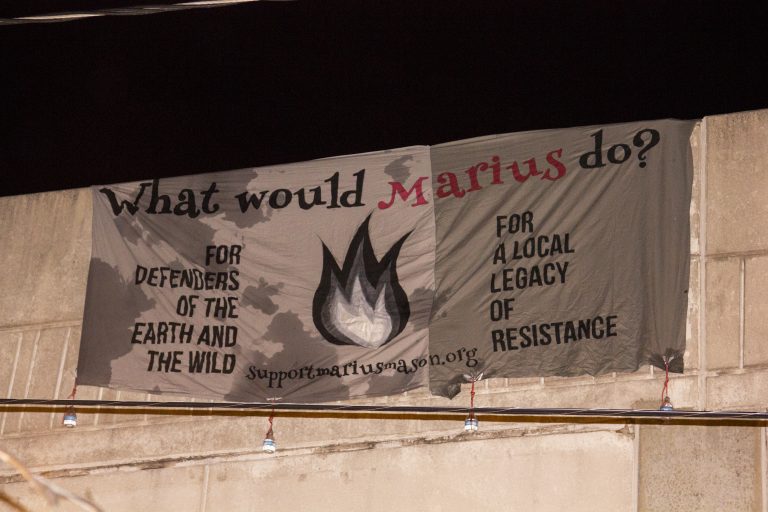 We are consistently inspired by Marius Mason’s spirit and take strength from each of his paintings, poems, and letters. In an attempt to return the favor, we also chose to highlight his acts this New Year’s Eve. For many years, Marius lived and took action in Bloomington and we intend to maintain the passion and fighting spirit that he once embodied here. 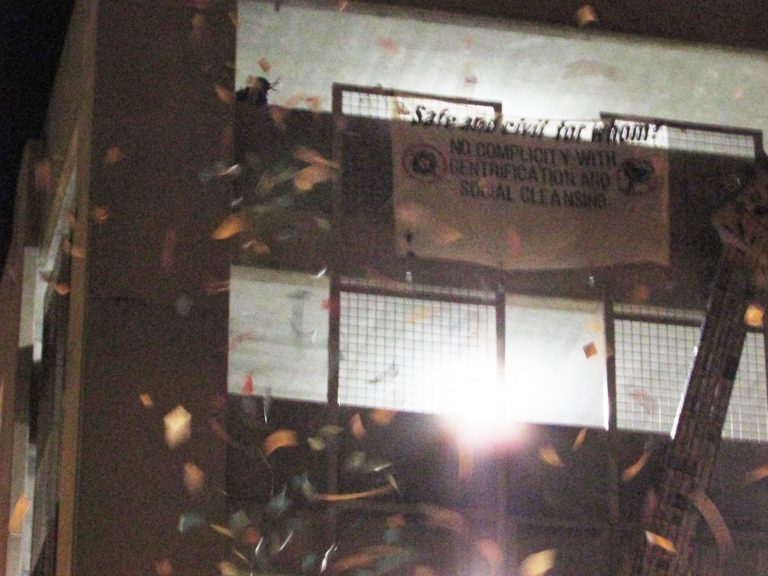 As a quaint college town and liberal bastion in a red state, Bloomington’s iteration of state violence often takes the form of closing off public space to undesirable populations to maintain a sterile, commerce-friendly environment. One of the primary targets of this cleansing is the sizable homeless population. The city has deployed social worker cops, signs discouraging giving money to people on the street, and several new security cameras in popular hangouts like People’s Park. Despite their language of safety and compassion, we know that the city government has no interest in genuine solutions to the problems of poverty, unaffordable housing, and addiction; in reality, it exists to manage and police the conditions that create these problems. We have made a choice to not fall for the soft policing of the non-profits and charities that are in the pocket of the city.

DAPL is being built to carry crude oil from North Dakota to Illinois, crossing under the Missouri River and through land that was guaranteed to the Sioux Native American community in the 1851 Fort Laramie Treaty. Pipelines often burst and leak oil into natural water sources; DAPL endangers clean water for nearly 10,000 individuals.

Participants expressed their support of ongoing resistance to DAPL. We shared updates on materials collection and fundraising to support the struggle through the harsh North Dakota winter, while also laying plans for spreading solidarity in the event of further state raids.

The assembly concluded with an action at the Sunoco on south Walnut in response to Sunoco’s hefty investment in the DAPL project, through its parent company Energy Transfer Partners. We picketed the station and blocked one entrance briefly. By demonstrating, we hope to spread awareness of the struggle and the repression at Standing Rock, and make sure that those profiting from the pipeline know that they will face consequences for jailing and injuring water defenders. Resistance will take many forms and spread in the coming weeks, as the construction contractors approach the river and the police ramp up their attacks.