Standard
Bloomington YDSA issued the following statement at the emergency demonstration earlier this month against the possibility of war with Iran.
The Cure to State Terror is Popular Power
“I knew that I could never again raise my voice against the violence of the oppressed in the ghettos without having first spoken clearly to the greatest purveyor of violence in the world today, my own government.”

The United States has assassinated Qasem Soleimani, one of the highest-ranking public officials in Iran. It should be clear to all of us what the goals of this attack are. While politicians and public officials cheer at what they call a “decisive blow” to the Iranian Military, while they congratulate themselves on thwarting an “imminent threat,” history lays bare their flimsy justifications. We need only consider Osama bin Laden’s assassination, which did not constitute a “decisive blow” to the power of al-Qaeda. Or Abu Bakr al-Baghdadi’s assassination which clearly did not put an end to the “imminent threat” of ISIS. Not only do organizations such as ISIS and al-Qaeda persist beyond the death of individual members, but the US’s use of violence–often resulting in devastating collateral damage due to sloppily executed attacks and drone strikes that cause indiscriminate harm to bystanders—only adds fuel to the fire that such organizations need to survive. That attacks of this nature result in destabilization and blowback is an indisputable fact. Therefore, when we read about the assassination of Soleimani, all we see is a provocation. All of the powers in the Middle East–from ISIS to Assad, America to Iran– have been threatened by the past three months of anti-sectarian working class uprisings in the central squares and slums of Beirut, Baghdad, and Tehran.  The murder of Soleimani is not just aimed at Iran, but against the risk that ordinary people will refuse to accept international and interreligious war, and instead pursue their class interests. When we see politicians cheering, we all know why: because they want war, and they want it to divide us.
While the Bush administration needed an elaborate lie to justify the war in Iraq, it is remarkable that almost twenty years later, the Trump administration doesn’t even need to bother with such a triviality. This is thanks to a long process in which the United States has asserted its right to use drones to kill anyone in the world without due process of the law. With the unprecedented bombing of Soleimani (the first time the US has openly assassinated a foreign official since World War II), the US now claims the sovereign decision of life or death over everyone in the world, without any due process of law. While such flagrant and extreme actions have previously been reserved for times of crisis and war, the United States now asserts this behavior to be business as usual. Therefore, unlike in the days of the Bush administration, when the hawks want war, they can simply murder a government official of another sovereign nation—openly and publicly—and then claim that any act of retaliation or self-defense is actually an act of aggression. This naked aggression reveals that the US is simply one violent gang among many: unbound, in the last analysis, by any international law.
We should not fall into the trap of thinking that this murderous behavior merely stems from the erratic and reckless behavior of that crackpot, Donald Trump. When it comes to this attack, Trump has acted precisely in the manner of his “stately” predecessors, Barack Obama and George W. Bush. The latter, who is largely responsible for the deaths of roughly 200,000 civilians during the occupation of Iraq, helped establish the norm of using drones to kill anyone suspected of a crime—never mind the due process of law or civilian lives that are lost in the process. Common sense says that such a president would be utterly offensive to our humanitarian and democratic sensibilities, and that such a president would be sharply condemned by their successor. Yet Obama actually escalated the use of drone attacks to unprecedented levels. It should be no surprise to us, then, that Trump should feel emboldened to openly drop a bomb on a foreign official. At least in this respect, it is clear Bush and Obama paved the way for Trump. The three ought to be considered together as a trio of war criminals.
This bipartisanship that has brought us to the present moment is just as obvious in the criticisms of Trump’s decision to assassinate Soleimani. Nearly all of them take the form: “Soleimani was a dangerous criminal, BUT…”, “Justice was done to Soleimani, BUT…”. What this rhetoric effectively says is: “All our intentions are in the right place. It is understandable why a reasonable person might wish to carry out this attack, although I may disagree with it for one reason or another.” How about we cut the bullshit? Any reasonable person can see that this action puts hundreds of thousands of innocent lives at risk. For that reason, it is nothing short of reprehensible. There is no icing on the cake with actions of such immeasurable danger. 200,000 innocent civilians died in Iraq as a result of this type of behavior. We condemn it in its entirety.
The idea that this attack will make anyone safer is laughable. How stupid do these politicians really think we are? The recent news headlines speak for themselves: “Officials say New York City is country’s top terror target,” “Boston police taking extra security measures,” “U.S. embassy urges citizens to depart Iraq immediately.” And worse–what the U.S. media cannot even register—is the fact that the danger to American lives is nearly invisible compared to the danger facing the multitude of Iranian civilians and others in the region, especially if the promised Iranian retaliation provokes a U.S. invasion. The United States has proven that it is capable of carrying out such atrocities. We will not put our support behind any of the terroristic gangs practicing violence in the world today.
We can’t let any of the politicians set the terms of the conflict. We won’t accept Islamophobic aggression. We won’t accept endless war in the name of keeping us safe. Our safety lies in building a powerful grassroots movement to fight for a worthwhile future–the same movement already underway in the occupied Tahrir Square in Baghdad.
Bloomington Young Democratic Socialists of America
https://www.facebook.com/YDSABloomington
Image 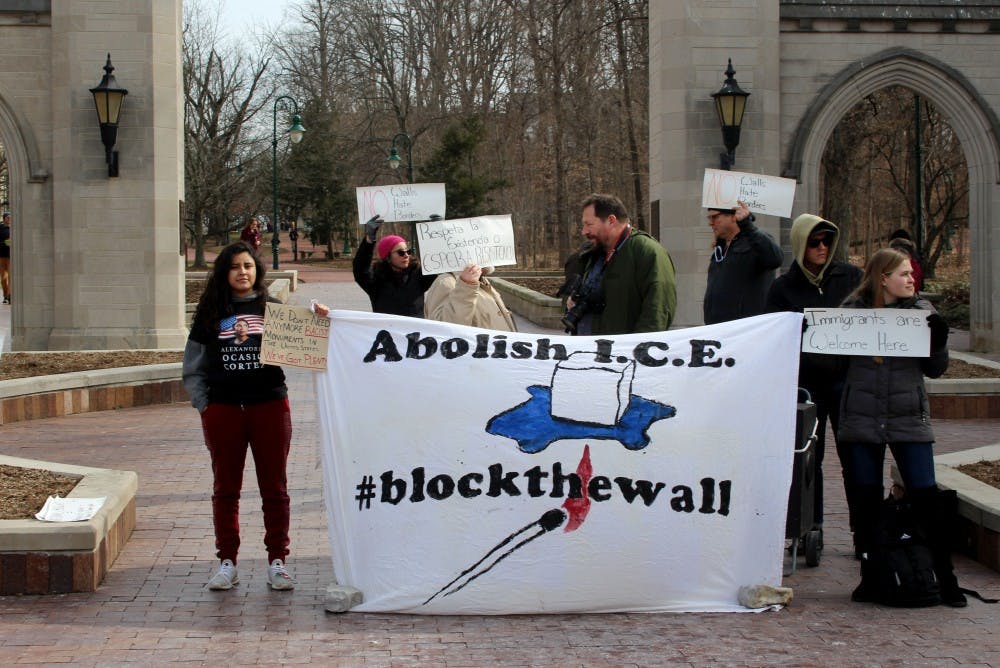 After President Trump declared a national emergency Friday to fund construction of a wall along the U.S. southern border, several Bloomington groups organized a protest against the wall Tuesday at Sample Gates.

About a dozen people were at the protest, which started at 11:30 a.m. They held handwritten signs and banners with messages in support of immigrants and against the president, U.S. Immigrations and Customs Enforcement and the border wall. The protestors waved at cars honking in support of them as they drove by.

“It’s not an actual emergency,” freshman and UndocuHoosiers member Deisdy Rodriguez said. “There are other, actual emergencies. He’s abusing his power.”

The president announced the emergency declaration after Congress passed a spending bill that did not include the money he wanted for the wall.

“I feel compelled to voice my concern against a border wall,” Marta Gerbig, 45, said. “I think the policy is grounded in racism.”

Bloomington’s Tuesday demonstration joined similar protests in cities around the country. Pamphlets handed out at the protest called for protestors to “create a real national emergency for Trump.”

The idea for the protest in Bloomington came from IU on Strike. According to the group’s Twitter biography, it organized a strike in April 2013. “Can we mobilize here in #Bloomington against the #FakeTrumpEmergency and to support asylum-seekers? We can help deal #blockthewall and block Trump,” the group tweeted.